William H. Welch was initiated into Beta Chapter on September 25, 1967. He was inducted into the Local Beta Chapter Hall of Fame for his Achievement in the Arts and Service to Chapter. In 1987, Bill sent news to the alumni mailbox stating that “after eight years in graphic design advertising agencies and like institutions of dubious worth, I have pursued a career in “fine arts.” A Nantucket and Key West-based artist, he received his art education at Ohio University with further study at the Philadelphia College of Art. Bill has spent a decade following a nineteenth century painter’s path through Europe, concentrating in Normandy, northern Italy, Provence and Portugal. He considers himself an “academic impressionist,” drawing on his training in realism and expressive passion for light and color. 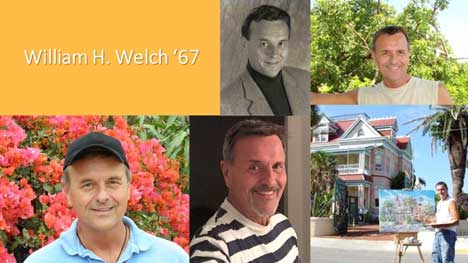 His studios are the focus of many private and corporate art collectors. In addition to teaching activities, William Welch is a member of painting societies, including the National Watercolor Society, the Artist’s Association of Nantucket, the Copley Society of Boston and the Philadelphia Water Color Club, where he is a Signature Member. He is also contributor of work to the United States Department of State’s Art in Embassies Program and has been honored by President Clinton and Secretary Christopher for his support. His works are represented in many prominent galleries including the Chadd’s Ford Art Gallery in Pennsylvania, the Robert Wilson Galleries in Sarasota, and the Gallery on Greene Street in Key West, Florida. 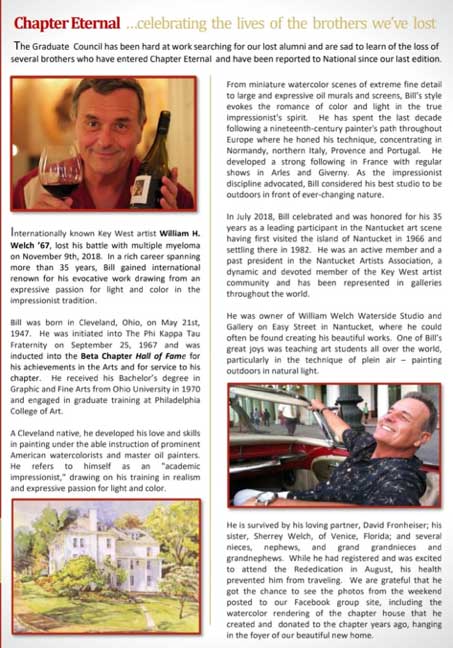 About 2000, Bill demonstrated his talents by completing a watercolor portrait of our fraternity house which he kindly donated to the chapter. His painting was promptly hung in the foyer for all brothers and guests of 50 E. State Street to enjoy as they entered our home. Part of Bill’s inspiration was to produce a limited number of prints from the painting as a gift premium for alumni who make financial donations to the House Corporation, which serves as a great reminder of the nostalgic days when you were still in school.