The family of Bill decided to donate his painting of Arles City Hall to the City of Arles.  Marianne Huber, Bill’s friend and CIRCA gallery owner made all the arrangements.  On July 23, it was presented to the Mayor of Arles, Herve Schiavetti, and will hang proudly in the Mayor’s Office.

From the Arles France Newspaper:

INITIATIVE A William Welch watercolor offered to the city 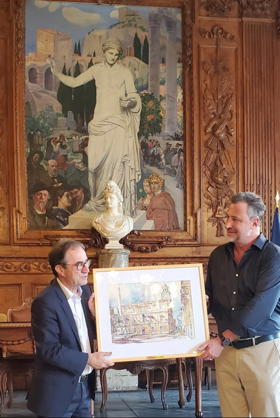 The relatives of William Welch, including his companion David Fronheisir (right), gave a watercolor of the artist to the city, which will be hung in the office of the mayor, Hervé Schiavetti (left).

It is a beautiful posthumous tribute that the City of Arles made to William Welch, American painter. It must be said that he too honored him, by formulating before his death the wish to offer Arles a watercolor of the facade of the Hotel de Ville, seen from the Place de la Republique, painted in 2016. The work will now be enthroned in the mayor’s office, in place of another painting that will be restored. “The next mayor will enjoy it,” smiles Hervé Schiavetti. Last week, he received relatives of William Welch, whom they nicknamed “Bill”, like the gallerist Marianne Hueber Arles.

He discovers Arles through Van Gogh

“In the apartment he lived here, there was this work. He told us to donate to the city, “she says, moved. “Bill,” it was his friend. She has also dedicated exhibitions in 2013 and 2015 in her gallery CirCa.

His disappearance in November 2018 was very brutal for all, when he was only 70 years old. His family came straight from Florida to attend this ceremony, in the hall of honor of the town hall, where weddings are celebrated. For his companion David Fronheisir, the moment is very strong: “I try not to cry.” But he keeps his face and reassures himself: “William would have been very proud.”

And for good reason, to be honored by Arles, it is a beautiful reward for the one who lived between Florida and here. William Welch had discovered Arles through Van Gogh and his studies of Impressionist painters. He drew inspiration from it and painted several works. There will be one now in the mayor’s office, as he wished. The painter’s family will keep the memory of this intimate ceremony during which she received the medal of the city from the hands of the mayor.