An American in Provence 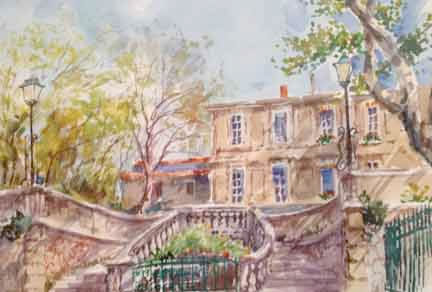 This last October 5th, Bill debuted a one-person show in Arles France, the culmination of several stays in province over the last few years. It featured 55 of his pastels, watercolors and oils all of subjects in southern France and Arles in particular.

The CIRCA gallery in Arles hosted the opening and over twenty of the artists’ friends and family from the USA were in attendance.

The paintings were almost all done on location there and remained displayed through November. Sales were strong; especially satisfying were the French art buyers selections. “I was so pleased with the reception and comments about my work from the Arles residents,” says Bill. “It is truly humbling to be in Van Gogh country, working and painting with scenes he painted or may have appreciated .”

Bill has a solid representation now in France and a second show is planned for spring in 2015, likely in May . “I am thrilled to be part of the scene in France and really have felt drawn to Arles and the surrounding area. It has been a goal for a long time to work and live part time in France!”